Share a memory
Obituary & Services
Tribute Wall
Read more about the life story of Konstantinos "Denos" and share your memory.

Konstantinos “Denos” Antonopoulos, a devoted and loving husband, father, grandfather, brother and uncle, age 77, passed away peacefully at the Wayne Nursing and Rehab Center in Wayne, Pa on Monday, January 16, 2023

He was born in Polikastano, Kozani, Greece, to Andreas and Efthimia (nee Psounos) on October 10, 1945.

He met the love of his life in elementary school, sat behind her in class and even told his mother when he was only 11 years old that he was going to marry her one day. Once be completed his army duties, his dream came true and he married Evy in July of 1967. They celebrated their 55th wedding anniversary this past summer.

Deno and Evy emigrated to the USA after their wedding and settled in Chicago, where they raised their two loving daughters Efthimia and Olga. They later moved to Broomall, Pa in the fall of 1989 to be closer to their family and friends.

Deno was in the hospitality industry, working for many years at the Hyatt Regercy in O’Hare (Chicago) and the Chicago Hilton and Towers where he got to serve breakfast to the Chicago Bears every Sunday during home games. Who else can say they were friends with Walter Payton, Mike Ditka and Jim McMahon the year they made their Superbowl run and won!!?? After moving to Philadelphia, he continued on in the banquet department at the Ritz Carlton and the Philadelphia Marriott.

Working in the hospitality industry afforded him many opportunities to travel with his family and he never turned down a trip. He always looked forward to going back to his village in Greece in the summers to visit his relatives and friends. He loved to garden and had a huge passion for cars and knew the name, model and year of every car that drove by. The Philaldephia Auto show was something that he never missed.

His 5 grandchildren were his pride and joy and there was nothing in the world he wouldn’t do for them.  They also adored their “pappouli” and named him “best babysitter” They tried in vain for years to teach him how to use social media and even text, but he was content with his beloved “word search” books and watching his Eagles play.

He is predeceased by his parents Andreas and Efthimia.

He is survived by his beloved wife Evy (nee Papadopoulos), his daughter Efthimia-Timi (George), his daughter Olga (Steve), his brother Evangelos (Glykeria), grandchildren Ilias, Mia, Constantina, Maria and George, many sisters in law, brothers in law, cousins, nieces and nephews who love him and will miss him dearly.

His viewing and funeral will be held at St. George Greek Orthodox Church in Media, Pa on Monday January 23 at 11:00 am. Viewing will be from 10-11 am. Interment in Ss. Peter and Paul Cemetery, Springfield, PA .19064

In lieu of flowers, memorial contributions may be made to St. George Greek Orthodox Church

To send flowers to the family or plant a tree in memory of Konstantinos "Denos" Antonopoulos, please visit our floral store. 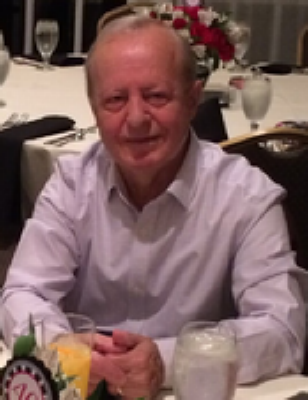