Plant a tree in memory of Seerarpy
An environmentally-friendly option 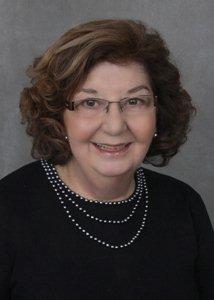 Our beloved Seerarpy “Opy” (nee Damerjian) of Telford, PA, passed away peacefully at her home on Tuesday, March 30.  She was surrounded and in contact with her family up to her last breath.  Opy was the daughter of the late David and Tevolinda Damerjian and was born and raised in Germantown along with her 5 siblings.  She was a 1956 graduate of Germantown High School – one of the oldest high schools in the country.  By all accounts and life stories, the Damerjian family was one of love, togetherness, caring, and belief in God.

In 1958 she married John Eskandarian of Telford, a borough straddling Bucks and Montgomery counties.  They raised their family on the same property that John himself grew up on, at the time still occupied by his family and operated their family business, Telford Cleaners and Dyers.  Following high school and into her marriage, she held jobs as a secretary for Honeywell, Leeds & Northrup and eventually with Lemmon Pharmaceuticals.  For the last 30 years, Opy was a realtor, serving the Bucks and Montgomery counties as residential real estate professional.  Through both her lean and productive sales years, she made every client feel special with many becoming friends for life – a true reflection of exactly how she treated all she met -- with abundant giving and a kind spirit.

Opy was extraordinarily proud of her Armenian heritage and was always sharing her culture – from music, art, religion, history and most of all cuisine among non-Armenian friends.  She enjoyed church dances, food festivals, lectures and of course preparing savory Armenian dishes, mouth-watering choreg, sweet desserts, and famously known stuffed grape leaves (using the leaves grown on the property fastidiously tended by John).  She was a member of the Women’s Guild at her church, St. Sahag & St. Mesrob Armenian Apostolic Church.

Outside of the church and Armenian social circles, Opy was committed to helping in her community and for many years served in The Indian Valley Women’s Club and as chairwoman for its Holiday Fair, an annual charity fundraiser.  As the Telford Cleaners was winding down, Opy and sister Deskouhi opened the Telford Exchange in the back rooms, an opportunity to sell treasured found items and stay connected with the community.  Their labors moved to an antique center once the cleaner’s property was sold.

No discussion of Opy can ignore the Shore.  The beach life was embedded in Opy’s DNA and any opportunity to be at the shore was taken without hesitation.  Eventually having a home in Ocean City, New Jersey, helped quench her craving for sand, saltwater, boardwalk strolls, and weekend craft and antique shows.  Most of all, the beach house has been a place for family and friend gatherings, a chance to share food, and enjoy the cool salt air breezes together.

Opy is survived by her husband of over 62 years, John.  In addition, by her children Karen (Gregory) Manougian of Rockville, MD; Michael (Kathryn) Eskandarian of Bedford, MA; Jay Eskandarian of Dana Point, CA; and Lisa (Bill) McCausland of Novi, MI.  Also, by her eight grandchildren, Philip, Alec, Aram, Ani, Amanda, Julia, Alexandra and William.  Opy lived for her grandchildren and adored them with endless love.

In lieu of flowers, donations can be made in her name to St. Sahag & St. Mesrob Armenian Apostolic Church, 620 Clothier Road, Wynnewood, PA  19096.  Internment is private.

Plant a tree in memory of Seerarpy by clicking here.
To send flowers to Seerarpy's family, please visit our floral store.

Plant a tree in memory of Seerarpy
An environmentally-friendly option

Plant a tree in memory of Seerarpy

12 trees planted in memory of Seerarpy

Go with peace Aunt Op. You will be definitely be missed. With Love, Lev.
Leon Attarian

Bobby and Debbie and Zachary Ekizian

We love you Aunt Opy... for the peanut butter on waffles, for the Pizzella's, for your funny stories including the flasher outside your window. Those were great times that I will never, ever forget
Bobby and Debbie and Zachary Ekizian

A Memorial Tree was ordered in memory of Seerarpy "Opy" Eskandarian.  Plant a Tree

Opy was our realtor when we bought our current home.   She was always warm and friendly.  And someone who was obviously dedicated to family

Opy always had a smile for you. She was helpful when I was a new agent and was generous with her time and knowledge. I'll miss her laughter and stories.

A Memorial Tree was ordered in memory of Seerarpy "Opy" Eskandarian.  Plant a Tree

Plant a tree in memory of Seerarpy